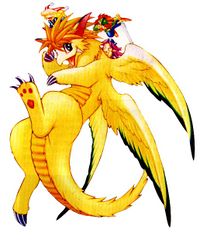 Trials of Mana artwork of Duran, Angela, and Charlotte riding atop Flammie

Flammies, sometimes spelled Flammy, are a recurring species of dragons in the Mana franchise, and first appear in Secret of Mana. Though not principally a main character, Flammie nonetheless serves an important role by transporting party members on its back, usually to access some location that they couldn't before.

Several characters have appeared with the name "Flammie" throughout the series: a male version is in Secret of Mana, a female is in Trials of Mana, and a third Flammie, also female, appears in Children of Mana.

The history of the Flammies is detailed throughout the various games in the Mana series, particularly Legend of Mana, and are described as "beautiful yet powerful beasts" created by the Moon Gods, a race of omnipotent beings responsible for most of the life in the world. While the Flammies featured within the games of the series are depicted as off-white or yellow, the ancient world was populated by Flammies of six different colors, a new one being born when each Moon God went to sleep.

Eventually, the Moon Gods attempted to prove each was better than the others by creating new, powerful beasts to roam the land. These creatures, along with the Flammies themselves, often quarreled at the gods' expense, tearing apart the world as they struggled to sustain it. A rift to another world was opened in the process, unleashing dark magic across the land, and sparked wars that were fought by terrible beasts that threatened the gods themselves. The prolonged fighting damaged the Mana Tree, a gigantic tree that served as the central life force of the planet. In order to keep the power of Mana from diminishing, the gods divided crystallized portions of energy from the tree itself and gave it to six Flammies, who scattered their power across the world, becoming a "flying river of Mana".

The efforts of the Flammies were enough to empower the planet to such an extent that the rift to the dark world was closed, but as they returned to their home, the gods were nowhere to be found. Saddened, they flew far into the sky, never to be seen again. Many years passed, and new races such as humans and fairies began to populate the world. One day, six brightly colored rays of light descended on the land, imbuing the land in life energy and ushering in a new golden age. New species began to appear that resembled the Flammies, such as dragons, however they were said to lack the beauty and divinity of true Flammies, though no one had ever laid eyes on one. Creatures similar in power to Flammies called wyrms were summoned to the land by powerful mages, and were used to carry out their various purposes.

While a Flammie's appearance is overall very draconic, they do possess several unique traits that makes it difficult to attribute their features to any one particular animal, and it appears to be as much mammalian as it is reptilian. While Flammies have a scaley, ribbed underside, the rest of their body is covered in a fine fur, with a tuft of thick hair at the top of their heads. They also possess a beak-like mouth with two large fangs near the back, and a pair of long ears. Their hind legs are larger and thicker than their front, and have four small fleshy pads at the bottom to aid in sitting.

The Flammie's most distinguishing feature, however, are the twin pairs of large, feathery wings that extend from its upper back. These wings, though not exceptionally large, work in tandum to generate the lift needed to keep both Flammie and its passengers in the air. If its activity in the games is any indication, Flammies can remain airborne for extreme periods of time, and by tilting their wings slightly, they can move up or down as well as side to side without losing momentum. 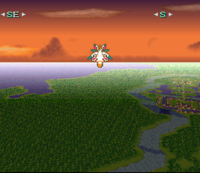 In Secret of Mana, Flamme is discovered, newly hatched, by the main characters Randi, Primm, and Popoi within a small grotto known as the Cave of the White Dragon after a surprise attack from a Great Viper. Now the last of his kind, the young male drake is alone and afraid for his own life, to which Primm becomes sympathetic. Randi notes that the dragon is surprisingly too large for them to take with them, and so the party decides to leave him in the care of King Truffle, ruler of Matango. Citing an ancient prophecy about a Hero of Mana on a white dragon, Truffle names the pup Flammie. Flammie is then left in the King's care while the party goes about their business until they reach the Imperial Palace. When the Imperial general Geshtar causes the collapse of the citadel, King Truffle comes to the party's rescue aboard a fast-growing Flammie, now able to fly and eager to meet his new family. After flying to safety, Truffle bestows them with the Flammie Drum, allowing them to call upon their new friend at any time.

Serving as a means of aerial transport, Flammie can carry the three main characters on his back, and allows them access to nearly any location in the world, including the flying Mana Fortress. With the aid of a 3D map (made possible in the original version by the Super Nintendo Entertainment System's Mode 7 rendering), players can control Flammie from a "behind the back" third-person perspective, and fly over the landscape as it scrolls beneath them. This view can be switched to a top-down perspective; however, this view is the only option once Flammie flies low enough to land.

A creature similar to Flammie called the Mana Beast was summoned by the actions of the dark magician Thanatos in response to the Mana Fortress. This monster, though resembling Flammie, was considerably more mature and powerful than the one the heroes found, and possessed the ability to breathe fire. As the final boss of the game, Randi, Primm, and Popoi had to combat the beast with the full power of the Mana Sword in order to defeat it. The German translation of the game cast Flammie as the Mana Beast; however, the Mana Beast's identity is inconclusive in the original English translation.

“Known as the Winged Defender, Flammie is the emissary of the Goddess of Mana, said to protect the mountains and sky. The young dragon can be summoned by the Flammie Drum to fly the party around the map.”
—Square Enix Official Website

When the heroes of Trials of Mana need a form of transport that would allow them to reach the airborne portal to another world known as the Sanctuary of Mana, they recall an ancient prophecy about a large dragon creature that could soar across the skies without difficulty. Seeking this "Winged Defender", the group makes their way up a mountain called the Celestial Peak, only to find that the "great" Defender is actually "small", and is a young female dragon. Riesz (or Faerie depending on whether or not the player selected Riesz to be in the party) gives her the name Flammie, and the group rides on her back into the Sanctuary. After meeting with the Mana Goddess, she gives them a special item called the Flammie Drum that allows them to call upon Flammie to transport them anywhere.

As in the previous game, Flammie can fly just about anywhere in the world, landing in preset points that will allow the party to explore an area. Like the previous game, a top-down view can be achieved (2D version only) or the camera rotated (3D version only), giving the player a better view of the land below. Later in the game, a mid-air boss battle is fought while the party stands on Flammie's back.

“Then, a beautiful yet powerful beast appeared, awakening the Moon Gods. The Moon Gods named this beast of strength and beauty Flammy. Whenever one of the Moon Gods would fall asleep, another Flammy would appear. Eventually, Flammies of all six colors came to populate all the land.”
—In-Game Encyclopedia

Though not actively appearing in Legend of Mana, Flammie (or more appropriately, his race referred to coequally as "Flammies") is mentioned in the in-game World History feature, which outlines several pieces of lore in the Mana world. In it, the legend of the Flammies is explained in detail for the first time, and establishes a connection between them and the very forces that control the world.

In Children of Mana, shortly after the hero obtains the Mana Sword, they are encouraged to investigate the mystery of this object by traveling to the city of Topple, a center of trade and learning. However, in order to reach this place, the character will require some form of aerial transport, which is given to him by Moti, a researcher and historian who has in his possession the fabled Spin Drum that can be used to call Flammie at any time. With Flammie's assistance, the character is able to travel to the city, as well as navigate the rest world with minimal effort.

Once the Spin Drum is obtained, the option to summon Flammie becomes selectable in the game's start menu. When used, the player is returned to the world map and is able to select a number of destinations they wish to travel to, as well as zoom out of their current position and view the entire world.

Four music pieces have been associated with Flammie over the course of the Seiken Densetsu series. In Secret of Mana, the first theme that plays while flying on Flammie is "Flight into the Unknown" (track 22 on the Seiken Densetsu 2 Original Sound Version). After the Grand Palace is activated, it changes to "Dark Star". Later in the game, when the flying Mana Fortress surfaces, his theme is changed to the song "Prophecy" (track 29). In Trials of Mana, Flammie's theme is "Can You Fly, Sister?" from the Seiken Densetsu 3 Original Sound Version. All four songs were composed by Hiroki Kikuta.