“My dad is infuriating! I'm in charge of my life, not him!”
—Square Enix Official Website

Primm is one of the playable characters in Secret of Mana and a recurring character in the Mana series. Hailing from the Kingdom of Pandora, she is 17 years old, 5 ft. 4 in. tall, and weighs 104 lbs.

Primm was born to a wealthy family in Pandora and lived a comfortable childhood. She lost her mother before the events of the game, making her father pushing her to accept an arranged marriage with a nobleman. Elman wanted Primm to be a traditional wife as her mother was to him, but his daughter has grown to prefer Dyluck, the dashing captain of the Pandoran army, instead. Additional dialogue in the HD remake implies that she greatly idolizes Dyluck to the point of an unhealthy obsession and infatuation with him, for instance memorizing and recalling every single detail of his personality and daily schedule.

“The daughter of a nobleman of the Kingdom of Pandora. Although she lost her mother at a young age, she has otherwise lived a trouble-free life. Her selfish and strong-willed personality helps her in domineering her companions.”
—Secret of Mana iOS Official Website
“A young noblewoman from the Kingdom of Pandora. She rebels against her father's plan to arrange her mariage. After saving Randi from an ambush, she accompanies him on his journey to restore the power of Mana. Primm is also on her own quest to save her beloved Dyluck.”
—Secret of Mana HD Official Website

Primm can be encountered in two ways by Randi at the beginning of the game. If the boy speaks to Dyluck and/or his soldiers near the Water Palace, she can rescue him while he is kidnapped by the Goblins before heading back to Pandora. If Randi doesn't interact with the troops, then the Goblin Camp scene will not occur and Primm won't be recruitable once he visits Pandora castle. If she is recruited earlier and Randi attempts to explore Gaia's Navel before encountering the stone statue in the Haunted Forest, Primm will leave and will not be recruited until she is trapped in the Haunted Forest.

The young lady joins Randi either way since she heard that her fiance Dyluck has been sent to hunt the Witch in the Haunted Forest, as she is suspected to drain Pandora people of their energy. Primm fears that Dyluck might be in danger going into this mission. Her suspicions are revealed true when the party discover the young captain being teleported to the southern ruins per Thanatos's request. His rescue must wait, however, as the party receive a telepathic message telling them to come back to the Water Temple. There, they rescue Undine the water Elemental, granting Primm and Popoi magical powers.

After visitng the Underground Palace, Primm come across her childhood friend Pamaela seemlingly afflicted by Thanatos's curse. She tries to reason her, but her friend eerily walks off toward the ruins. Inside, the party discover a large altar on which both Dyluck and Pamaela sits on top with the mysterious sorcerer Thanatos. The heroes fall into his trap and are left to fend off against the evil mechanism responsible from draining the people's life energy. As they as victorious, both of Primm's significant friends are nowhere to be found.

Those two are only encountered again later at Northtown Ruins. Here a still possessed Pamaela boldly declares to Primm that she and Dyluck are getting married. Primm retaliates in her distress by hitting her friend to the head, her ending up being taken to a local doctor by Krissie. Deep within the ruins, the girl discovers Dyluck standing on a similar altar like the one from Pandora. As she rushes to him, he drains her energy and teleports her away, revealing he is still mind-controlled. Randi hits the captain, the latter coming to his senses. He then pleads the Randi and Popoi to rescue her from the backroom, where Thanatos holds her body hostage. While the evil sorcerer starts feasting on her soul, Dyluck sends his own life force to interfere with his schemes and revive Primm. Annoyed by their meddling, Thanatos retreats before leaving the party for Vampire to nibble on.

A while later after the Mana Fortress awakening by Thanatos, Primm briefly rejoins with Pamaela in the Mana Palace whose finally regain consciousness. Her friend expresses regret from acting that way before and confides in Primm that she was jealous of her relationship with Dyluck.

Dyluck is finally found deep within the Mana Fortress under Thanatos' spell yet again. The evil sorcerer reveals that his own body has reached its limit and needs another worthy vessel to house his spirit. As he couldn't take a normal human because his earthly envelope would tear apart, he went on a search for a human born in the shadow of darkness every few decades. It happens that Dyluck's body is one of them and is capable of augmenting his powers beyond comprehension. While the young soldier's powers were sealed as a child, he is no more than a puppet to Thanatos now and will be housing his evil soul and using the Mana Fortress to rule the world. The magic knight is suddently growing weaker by the minute and must now inhabit his new vessel before collapsing. Primm then lunges towards Dyluck as a way to prevent his possession going further attacking the evildoer in the process. The latter's body vanishes almost instantly but unfortunately, Thanatos's soul has become one with the major's body. Gloating about his newfound vessel, the possessed Dyluck tries to further his modus operandi, but suddently finds himself unable to do anything. An otherworldly but familiar voice resonates across the room, telling Primm to listen to it as it is Dyluck's spirit. His echo says that he cannot speak for too long since Thanatos's energy is too strong, but he knows a way to defeat the sorcerer. He reveals to the party that Thanatos was once an ancient sorcerer who sold his soul to Mavola in exchange for eternal life. While his spirit became eternal, his body slowly decayed and he must periodically find a new suitable host to possess. With each new body, his spirit grows ever darker as it feeds on hatred and destruction. Dyluck's spirit then apologizes to Primm, as he cannot join her in the mortal realm anymore and entrust Randi to take care of her. As he finishes his speech, Dyluck uses his last bit of strength to destroy his body, leaving Thanatos without a host and revealing his true face. Desperate to find an new host, the dark entity heads for the heroes in vain as he is eventually defeated.

Primm is seen assisting Randi alongside Popoi in reviving the Mana Sword's true power to defeat the Mana Beast during the very end of the game. After their triumph, they briefly mourn the passing of their sprite friend since Mana power has completely disappeared from this world. She is then seen leaving Randi for her hometown.

Primm makes a cameo appearance alongside many other characters from the Mana series. 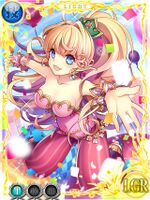 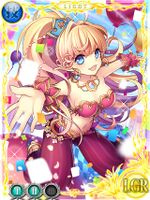 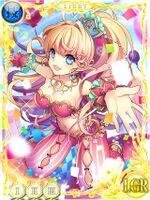 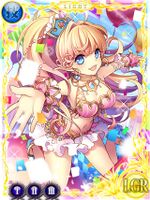 Primm appears as a recruitable Monster Pet in Rise of Mana. 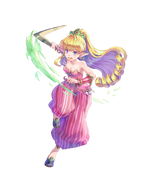 “A young noblewoman from the Kingdom of Pandora. Primm rebels against her father and decides to accompany Randi on his journey to restore Mana to the world. Primm is also on her own quest to save her beloved Dyluck.”
—Square Enix Official Website

Primm is a character and drawable unit. She currently has three known variants.

Primm is a white teenage girl with blue eyes and long blonde hair tied in a high ponytail. Her headdress is a small green crown with gold trim. She wears bright pink harem pants with a corset of the same color decorated with gold chains and turquoise jewels. He right angle sports a gold bracelet, accentuating her curled up indigo high heels.

Primm is depicted as strong-willed and opinionated in pretty much every interaction. She intensely cares for Dyluck and is seen to go above and beyond to save the one she loves. She also displays selfish tendencies as she almosts coerce Randi into joining her into saving her fiance and become upset to the point of leaving him should he decides to go to Gaia's Navel first.

In the 3D remake, many Inn cutscenes makes Primm and Popoi argue over who's in charge or menial details, to the point of completely ignoring a sheepish Randi.

Primm's default weapon is the glove. She is a typical support character, casting mainly defensive and healing spells while her combat ability ranks about average. She has the most balanced stats of the three characters, being more durable than Popoi but not as physically powerful as Randi. Her magic is largely defensive and healing in nature with the exceptions of Salamando and Lumina, who feature offensive magic.