Hawkeye is one of the six protagonists in Trials of Mana.

Hawkeye belongs to the Nevarlan Thieves' guild. Both of his parents, Sandarrow and Falcon, died while deserting their faction during the first invasion of Laurent. Raised by his grandfather Flamekhan alongside his children Jessica and Eagle, he eventually became a noble thief robbing from the corrupted upperclass. 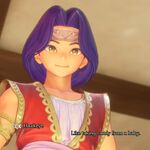 Hawkeye in his opening scene

“NOBLE THIEF OF THE NEVARLAN THIEF GUILD -- Hawkeye hails from the desert fortress of Nevarl, home to a guild of noble thieves. He was raised as the orphaned ward of Flamekhan, the leader, together with Flamekhan's own children, Eagle and Jessica. Hawkeye comes across as a laid-back and charming young man, making it hard to tell when he's being serious. But at his core, Hawkeye is a fiercely loyal friend. Nothing gets past his honed senses and quick wit.”
—Square Enix Official Website

Returning from a night raid in Sirthan, the young thief in informed by Isabella that the Thieves' Guild is no longer, having been replaced by a kingdom. As the newly formed nation prepares to invade their neighboring kingdom of Laurent, Hawkeye is left dubitative over the king's intentions. He voices his concerns to Eagle who shares his worries and together decide to spy on Flamekhan and his advisor Isabella. The two of them spot the mysterious lady conversing with a shadowy figure and quickly confront her motives. The advisor is revealed to be a powerful sorceress who readily ensnares Eagle, forcing Hawkeye to defeat his best friend. Framed for murder, the young thief is jailed, not before being warned by the witch to keep his mouth shut about what he's observed. Otherwise, Jessica's Choker of Death would activate and kill the poor lady. Hawkeye is then rescued moments after by his feline friend Niccolo, who explains that the Priest of Light might know how to uncurse the young lady. With that in mind, Hawkeye decides to leave his homeland for the Holy City.

Hawkeye shares many story elements with Riesz, who hails from Laurent, the kingdom Nevarl is invading. If either of them is chosen as the main protagonist, the main villain will be the Prince of Mavolia and the last dungeon will be the Dark Castle. After his quest is completed, Hawkeye meets with Jessica and Niccolo in Diin that thieves from all over the world has been coming back to the Nevarl Fortress. Here Flamekhan apologizes for his cruel behavior and promise to rebuild Nevarl to his former glory.

“Falcon and Sandarrow's child, hence Flamekhan's grandchild. In a future world, he would become one of the six heroes destined to save the world from a certain doom.”
—Notebook

Hawkeye makes a cameo appearance alongside many other characters from the Mana series. 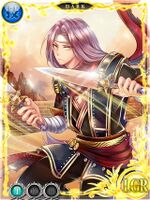 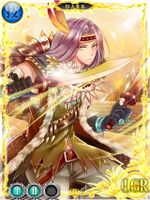 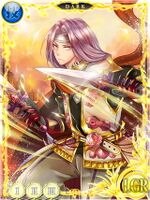 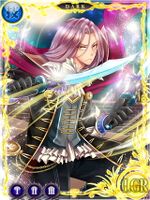 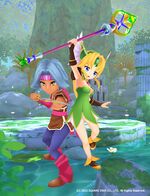 Hawkeye is a recruitable monster pet in Rise of Mana. 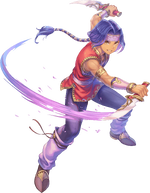 “Hawkeye hails from the desert fortress of Nevarl, home to a guild of noble thieves. He was raised as the orphaned ward of Flamekhan, the leader, together with Flamekhan's own children, Eagle and Jessica. Hawkeye comes across as a laid-back and charming young man, making it hard to tell when he's being serious. But at his core, Hawkeye is a fiercely loyal friend.”
—Square Enix Official Website

Hawkeye is a character and drawable unit. He currently has two known variants. He is the first unit to join the hero twins in battle as the guide for the opening tutorial, which takes place in the Nevarl Fortress.

Hawkeye is a young man with tanned skin and dark purple hair with a ponytail with white ribbons and a white headband on his forehead. He wears a sleeveless white tank underneath his red shirt and black pants with white leg warmers and brown boots and wears white wristbands.

While possessing a cunning character and uttering witty remarks, Hawkeye still displays numerous moments of selfless heroism and is seen deeply caring about others, especially when it comes to his immediate circle. Both the original and the HD version depict him as a womanizer, as he is seen flirting multiple times with the opposite sex.

He is also portrayed as despising royalty and nobility, as he views those of higher station as uppity and condescending. Those beliefs probably stem from his thieving upbringing.

In the 2D version, Hawkeye starts with high Dexterity and Luck, with average Strength, Stamina, Intelligence, and Luck. He is the only character whose normal attack can be dealt twice in quick succession. Should the player take his light path, the young thief will be granted Luna and Dryad support spells, as well as non-elemental trap moves. In his dark path, however, Hawkeye will learn elemental ninja techniques that lowers his opponents' stats.

In the HD version, Hawkeye boasts excellent Luck, but average to mediocre Strength, Stamina, Intellect, and Spirit. His starting abilities can make him play with status effects and increase the chance of finding items after combat. Goin along his light classes further explore the stat increase manipulation and the ability to gain or keep items. On the opposite side, his dark path focuses on exploiting enemies' elemental weakness, as well as inflicting debuffs and harmful status effects.

Note: Class 4 path is dependent upon the path of the Class 2 switch. All Class 3 abilities learnt are retained.

Below is a list of skill attacks Hawkeye learns across his different classes:

Below is a list of locked abilities Duran inherits upon class change:

Note: Locked abilities are exclusive to the HD remake.

Hawkeye is second in the group for having a wide variety of spells and skills at his command, where nearly all of his penultimate classes fill up the Item Ring to its maximum of 12.

Below is a table of spells Hawkeye learns across his different classes:

Below is a list of abilites Hawkeye can learn depending on his current class: Note: Abilities are exclusive to the HD remake.

Hawkeye wields a variety of knives, be it from daggers to even double bladed sets that join at the pommel, akin to thief swords as found in other future Square titles. Later knives as Hawkeye progresses in classes include utilitarian and multi purpose knives as a Ranger, focusing on its nature and foresting theme, while Ninja classes come to bear exotic and class exclusive codenamed knives forged to help them train and fully utilize their secretive ways of Ninjutsu. 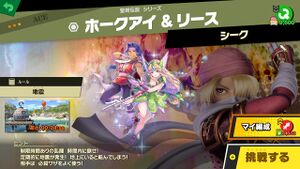 Riesz is a spirit alongside Hawkeye. Their spirits are held by Sheik and a Mii Sword Fighter and the battle takes place in the Great Bay.

Names in other languages[edit]