“The Mana Tribe, huh... I've got big shoes to fill, but I'll protect the world like my mother and father!”
—Square Enix Official Website

Randi is the main protagonist in Secret of Mana and a recurring character in the Mana series. He was adopted by the Elder of Potos Village after his mother had disappeared. He is the son of Serin and a woman from the Mana Clan and his successor as the Mana Knight, chosen wielder of the Mana Sword. He is 16 years old, 5 ft. 7 tall, and weighs 137 lbs.

Randi is the son of Serin, a tasnican knight and a Mana Clan Maiden. His father died in the war near Potos Village moments before obtaining the Mana Sword, while his mother took him to the Potos Elder before transforming into the Mana Tree in Pure Land, as it is custom for women who bore offspring to become. Randi was raised under the auspices of the village elder, not knowing of his lofty origins, and befriending the local kids near his age.

“The timid protagonist of the story. Raised by the elder of Potos Village, he has always been treated as an outsider and bullied by the other kids of the village. But one day, he pulls the legendary Mana Sword out from a stone and is thrown into a whole new world full of danger and intrigue.”
—Secret of Mana iOS Official Website
“The hero. Randi is a young boy who possesses immense courage. Upon hearing a mysterious voice he discovers the Mana Sword. Armed with the power of the Mana Sword, he sets forth on this quest to learn how to harness Mana.”
—Secret of Mana HD Official Website

While playing with his friends on a wooden platform in Potos Falls, the young lad trips and falls down into the water. There he discover an old rusty sword accompanied by a mysterious ghost prompting him to pull out the weapon. With the sword now on hand, Randi makes his way back to the village, only to discover that the sword was protecting the locals from monsters, who now proliferate in the vicinity. The village Elder has no choice but to banish him from the village, his last words revealing to the boy that he was brought here as a baby by her mother. Before leaving, a mysterious knight called Gemma urges him to seek the guidance of Luka from the Water Palace.

There the hero learns about the lore surrounding the fabled blade was used by the ancients to defeat the Empire who sought world domination by using the Mana Fortress. Now the same Empire wants to revive it. Should the Boy seek to repower the rusty blade by visiting the eight mana palaces and synchronize it with the Mana Seeds, the Sword of Mana will regain all of its power and can be used to thwart the evil forces once again. With that in mind, Randi holds up the sword to the Mana Seed of Water and gain a fraction of its power back. Sage Luka then entrusts the boy to visit the Underground Palace in Gaia's Navel, where the next Mana Seed lies.

While on his way, Randi is captured by a horde of Goblins and put whole in a giant sizzling pot for their feast. The boy is rescued by a young blonde lady, saying she mistook him for someone else. The bolts before telling him her name. Moving forward, Randi reaches the Kingdom of Pandora, noticing the townsfolk acting like zombies. There he rejoins with the girl he met in the woods, introducing herself as Primm. The girl has been put in an arranged marriage by her father and just angrily escaped a formal meeting. She accompanies the hero and tell him to find her boyfriend Dyluck with her. He learns from the king that a curse has been put on the whole city, suddenly making their inhabitants lifeless and unresponsive. His Majesty has sent troops led by Dyluck to the Witch's Castle, in hopes of stopping Elinee from bewitching people. Learning that her father and the King schemed to steer her away from Dyluck, she is more than ever dertermined to rescue her beloved.

As Randi finally reaches Gaia's Navel, Primm is upset he took this route first instead of going to the Haunted Forest to save Dyluck, and leave him all alone. The boy is now forced to fend off enemies on his lonesome before reaching Dwarf Village. There he meets with Watts, the local blacksmith, who tries to forge his sword for a small fee, before realizing that the holy sword has transferred some of its power to his hammer, making him possible to forge all sorts of weapons. Meanwhile, Randi decides to explore the village while Watts works on an axe. The young lad stumbles on a shady show run by the Dwarf Elder who end up robbing Randi for a large sum of money. The star of the show is a small sprite named Popoi who washed up inside Dwarf Village and who apparently need to pay up his debt to the elder. The scheme is quickly revealed and both of them end up paying Randi back as an apology. The whole village is suddenly attacked by a mutated plant, who end up revealing the entrance to the Underground Palace. However, the place is still blocked by a sea of lava cast by Elinee the Witch. Popoi the sprite is revealed to be amnesiac by the shock of the storm that led them to Dwarf Village, and decides to join the boy in his errand in hopes of returning to his homeland. During that time, Watts has finished forging an axe for Randi and decides to travel the world for himself.

Near the end of the game, Randi finally learns the truth about his origins by hearing the dying Mana Tree words in Pure Land. Being a descendent of the Mana Clan, he is destined to become the next Mana Knight guarding the Mana Tree and the restore the world's peace by destroying the Mana Fortress. This gives the boy enought confidence to live up to his parents and everyone's expectations by defeating the Empire's ambitions. In the final climax, the Mana Sword's full power is reawaken by the arrival of the fabled Mana Beast and is used to defeat the wrathful Benevodon, erasing Mana from this world, along with Popoi. The boy mourns their loss with Primm and quickly returns to Potos Falls where he shoves the blade back to its origin point. The boy is said to be reintegrated in Potos Village soon afterwards.

Randi makes a cameo appearance alongside many other characters from the Mana series. 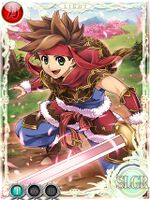 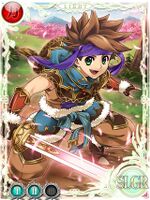 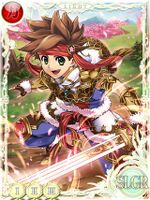 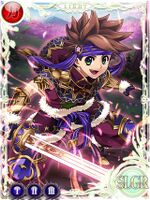 Randi appears as a recruitable Monster Pet in Rise of Mana. 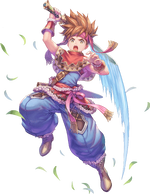 “The hero of Secret of Mana. Randi is a young boy who grows to possess immense courage. Treated as an outsider in Potos, he discovers the Mana Sword and sets forth on a quest to learn how to harness Mana.”
—Square Enix Official Website

Randi is a character and drawable unit. He currently has three known variants.

Randi is a white teenage man who has amber eyes and sports spiky brown hair tied at its roots by a washed-out red headband. He wears baggy blue overalls with a small red pelerine covering his neck and shoulders. He also has wristbands of the same color trimmed with white fluffy fur, as well as a large belt of the same material held together by a stripped ribbon. He wears fitted leather boots decorated with white fur.

While Randi is considered the protagonist of Secret of Mana, he doesn't seem to be as confident nor assertive as Primm and Popoi, mostly preferring to stay in the background. He displays courage nontheless when needed, even though he seems to doubt his capacity to wield the Mana Sword at first. Once Randi meets his mother the Mana Tree, however, he becomes single mindedly focused on thwarting the Mana Fortress's plan to destroy the world.

In the remake, the Inn cutscenes provide more characterization for the protagonists, making Randi look both self-conscious and proud to be the weilder of the Mana Sword. He is also shown to become flustered during Primm and Popoi's antics, perferring to resort to peaceful solutions.

Randi's default weapon is the sword. He is the most physically proficient member of the group, having the highest attack, defense and HP. As he has no magical ability whatsoever, this is counterbalanced by his weapon skill learning rate, in which he masters every weapon's special attacks the fastest of the trio.

Randi appears as a 4★ and 5★ unit in Brave Frontier.

Randi appears in Heavenstrike Rivals as a special collab with Secret of Mana. 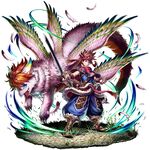 Randi appears in Last Cloudia as a special collab with Collection of Mana.

Randi appears as a unit in Merc Storia.

Names in other languages[edit]